Hurricane Ernesto formed in the Atlantic Ocean east of the Lesser Antilles and moved quickly trough the Caribbean Sea thankfully not gathering too much steam in the process.  This meant Texas surfers might get some tropical storm surf without much destruction or loss of life.  Unfortunately it’s fast, forward speed ran it straight into the Yucatan peninsula just grazing the Gulf of Mexico.  For a while I had my doubts if we would get any surf at all from it as it headed for Belize and was forecasted to turn even further South away from us. 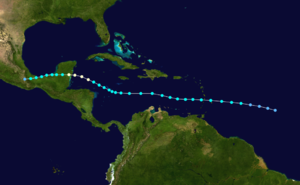 However while the storm was still in the Caribbean Sea, the mid-gulf buoy started to show some long interval swell.  Since hurricane Ernesto never actually got in the gulf and was certainly not in the Gulf at this point I’m not sure if these waves were “shot through the gap” between the Yucatan peninsula and Cuba or created just by the outer wind-field of the storm spilling over into the gulf.  I never really believed swells could “shoot the gap” and make it all the way across the gulf to Texas but at this point I didn’t care.  It was August, the surf had been flat for five weeks and there were waves headed our way.

The mid-gulf buoy continued a slow but steady rise of pure swell for over 26 hrs.before some 12 second interval swell started to show on the Galveston buoy and even then it was only 1.3′ for several hours before “jumping” to 1.6′ and of course it happened at night.  I was surprisingly able to sleep a few hours despite the butterflies, got up early eager to check the buoys and was dismayed to find the Galveston buoy had dropped back to 1.3′!  It didn’t matter, I was still pretty confident that at least some small, clean swell would arrive that morning.  I managed to leave the house without waking anybody, got to Surfside about 7 a.m. and found the surf clean and bigger than expected.  A quick check of Beach Drive found a few people already out in some really good looking waves but a little walled-up with many long closeout sections.

Beach Drive is the “main spot” and several surfers were getting ready to paddle out into what was about to be a crowded line-up so I decided to check the jetty.  A notoriously slow break normally, the jetty can actually be bigger and better than Beach Drive during these easterly groundswell conditions as waves sort of wedge in to the “corner” and stack up.  As I pulled into the jetty parking lot I was stoked to see it mostly empty so I quickly made the loop around and began backing into a front-row parking spot.  Through the rear-view mirror I saw the spray of a feathering wave over the granite revetment.  For the surf to look like that from that angle made my pulse race.  I quickly got out and climbed up the revetment to find a quietening sea decorated with a lattice-work of shimmering foam.  The foam had a pattern and character left by waves of good size and quality for surfing.  The wind was straight offshore and no one was out.

The water was up high but it was obvious it had been higher for the sand was wet up to the dunes but not soaked.  This made me wonder if the sand was wet from a receding tide or if it was from some even larger sets of waves surging over the beach earlier.  I’d seen this before with more powerful storms but didn’t expect it with hurricane Ernesto.   The scenario didn’t make sense based on the mid gulf buoy which showed a slow, gradual rise over several hours not a sudden jump.

A set appeared, again bigger than expected and looonng, some of the longest lines Ive seen in Surfside.  It looked even better than Beach Drive. 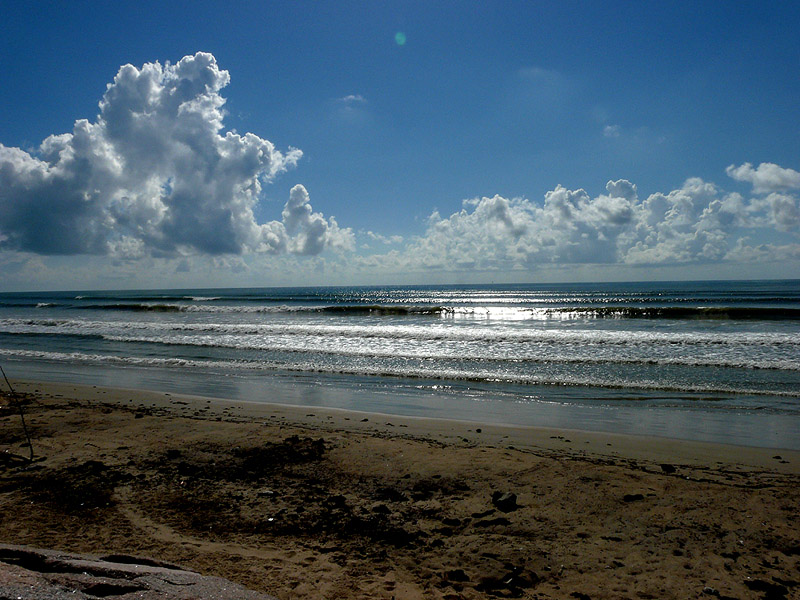 The sun was already strong at 7:30 a.m.so I wasted no time getting ready, paddled out and in the process I lost my wedding ring.  This angered me and threatened to ruin things but I quickly caught several fast, good-sized waves with long, tapered walls that took a little of the sting out of losing the ring.  Whether these waves were “shot through the gap” or created by the outer wind-field these swells had a long fetch for the gulf and some really long ride-able faces for the upper coast of Texas.  During the lulls the sea surface would become completely smooth and quiet except for the inside break which created a low roar audible way back outside where I was surfing – a very unusual experience for the upper coast of Texas and something one would more likely see and hear in Mexico or southern California while surfing the Pacific Ocean.  I was surprised how good it was and with no crowd.  Even though the jetty break is normally slower than Beach Drive it’s also normally cleaner so there’s still quite a few who prefer it to the crowds and I wondered where that crew was.  Also, since many of the good surfers who frequent Beach Drive are aware of what an easterly groundswell can do at the jetty I wondered where they were too.

I probably surfed for 45 minutes before someone else finally paddled out.  The second surfer approached the outside just as I took off on a large set wave and I reveled in the fact that someone was there to witness it.  It was a long left with a nice looking peak that came right my way.  The conditions were buttery smooth and I was able to catch the wave early.   I managed what felt like a decent backhand bottom turn and started pumping the board for speed as the wave jacked up even further.  With the angle of the sun coming from behind, the wave cast a large shadow out in front of my surfboard and into the trough of the wave.   Angling back up the face of the wave I set a high line on a wall that stretched out at least a hundred feet in front of me.  A quick step to the forward third of the board and a little shuffle resulted in a nose ride of at least six or seven seconds before the section in front of me broke.  The floater opportunity was tempting on that big soft section but I pulled out instead which enabled me to paddle back out quickly.  I caught maybe a dozen more set waves and a few lesser waves over the next hour or so and noticed the lulls between sets were getting longer.  During one of the lulls I looked back towards land and it occurred to me what a beautiful day it was at Surfside with the usual mid-summer haze and humidity gone, having been drawn towards the hurricane leaving the air sharply clear.  The beach and funky old neighborhood set a subdued yet oddly festive tone in the bright sun with the variously shaped and colored roofs reflecting brightly all the way back out in the water.  This reminded me how the neighborhood has it’s own history with hurricanes and how some of the incongruity in it’s skyline was due to the scars resulting from these run-ins.  I thought of storms past that flooded the neighborhood, deroofed homes and started fires that burned some to the ground.  Thankfully this hurricane was not coming here and the main threat was sunburn and heat stroke.  There were some looming thunderstorms inland that remained distant and teased with tantalizing shade.

At one point the large petro-chemical complex to the south and west was shadowed by it’s own low, dark cloud while while in contrast everything in the foreground was perfectly lit. It would have made a cool photo I remember thinking. I rode a wave in, had a bite, drank some ice water, applied more sunscreen, took a few pics and headed back out.

I expected it to get bigger but instead it quit peaking and breaking on the far outside and became even more lined-up in the middle and inside breaks. When I left around 12:30 it was still really good but the sun was too intense to stay any longer even though some of the storms had nearly reached the beach.

I ended up driving through some pretty hard rain on the way home I packed up again and planned on heading down early the next morning but buoys dropped a little overnight so I aborted. I knew it would still be pretty good but not as good as what I’d already caught so I decided to save the gas money and not diminish the memory of Ernesto with lesser waves.

Best Sunscreen For Surfing in Texas